There's a bunch of Chefs on TV news this week, so we thought it best to wrap it up in a nice to-go package. Throw it in the microwave for later.

SHOPPING WITH CHEFS: Sona and Comme Ca chef and owner David Myers teams up with Josie chef Jill Davie to find the best ingredients, tools, gadgets, wine, etc. on this new show. The two have good chemistry: Jill is a total firecracker, a good foil for David's Zen personality. There are trailers on the Fine Living website, but the video above proves that Jill is just as comfortable on camera as she is in the kitchen. Premieres July 22 at 8pm, then airs weekends at 1pm beginning July 28.

HELL'S KITCHEN: SPOILER ALERT! Our gal Bonnie Muirhead made it through yet another week with Gordon Ramsay, which is a little surprising. At this point we think ol' Gordo's kind of sweet on the inexperienced chef. That, or the producers are. Anyhoo, if our memory serves us correctly, several months ago we heard that five remaining chefs taped an episode at Alhambra High School, where they cooked for 100 hungry teenagers, which should be this week. We don't know the outcome, but the fact that short-order cook Julia is going in, we think anything she fries will be a favorite. We also read somewhere that a real tear-jerker of a goodbye is coming up, when Gordo gives one of his departing chefs a heartfelt speech. That also must be Julia, who probably isn't ready to head up her own Vegas kitchen, but showed her stamina and inherent smarts since day one. Airs Monday, July 23, 9pm. 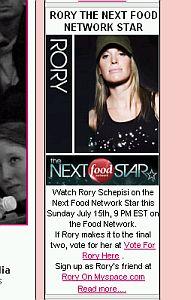 THE NEXT FOOD NETWORK STAR: Perusing Perez Hilton as we occasionally do in the late afternoons, we came across this ad for Rory, The Next Food Network Star. We think it was a link to vote for Rory, or is it a subtle hint that Rory already won? Voting ended yesterday, but you know how these shows go: Producers have a way of making things happen. The real question is, did she pay for this ad or did the Food Network? We don't see one for Amy, the other finalist. After Paul got kicked off, we failed to watch again, but we learned it was down to Rory and Jag, but the ex-marine lied about his culinary school background and "resigned." Now it's toothy Rory and straight-shooter Amy. The final ep airs this Sunday, July 22 at 9pm.