Eater StarWatch: Bruce Willis at Cut, Posh and Becks at Mastro's, Courteney and Jen, and MORE

Share All sharing options for: Eater StarWatch: Bruce Willis at Cut, Posh and Becks at Mastro's, Courteney and Jen, and MORE

Hey, has anyone seen the Beckhams around here? We can't find them anywhere. Anyway, if you spot them—or anyone else for that matter—do drop us a line.

CUT: Here's the kind of tip we can't get enough of, for so many reasons. From a diner who was there last Wednesday: "Was two tables down from four guys in a booth getting way too much attention from a past-her-prime, trying-to-fit-in-her-dress ex-bimbo literally hanging on the railing above their spot for the better part of an hour, bosom dangling inches away from Bruce Willis, across from whom at the same table sat Jeffrey Katzenberg." [StarWatch Inbox]

DRESDEN: One half of Flight of the Conchords, the one without the glasses, Bret McKenzie was spotted taking in a little Marty and Elayne. Perhaps for inspiration? [StarWatch Inbox]

PENTHOUSE: Before she hit rock bottom---again---Lindsay Lohan was on top of the world, or at least the Huntley Hotel in Santa Monica, last Friday night. [Buzz Clubs]

MASTRO'S: Spotted leaving the Beverly Hills steakhouse, Victoria and David Beckham as people outside were shouting "Go back to England." Classy. [X17]

HUNGRY CAT: A tipster spotted Paul Reubens at the Hollywood restaurant for the second time last Tuesday. "Either coincidence, or he really likes seafood and fresh juice cocktails." [Defamer] 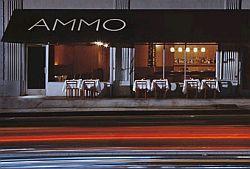 AMMO: The Office star John Krasinksi spotted having lunch last week. "He was good-looking in comparison to the behind-the-scenes execs he was sitting with." [Defamer]

PANE E VINO: With her Beso dragging its feet, Eva Longoria settled for some Italian with BFF Mario Lopez at the WeHo resto. [X17]

CHATEAU MARMONT: Heaven forbid these people would eat a meal at home. Becks, Posh and Eva Longoria were spotted leaving lunch at the hotel. [Splash]

GIORGIO BALDI: Getting tired of the scene at Il Sole, Courteney Cox, her hubby David Arquette, and pal Jennifer Aniston opted for overpriced Italian fare near the beach last Saturday. Also in the house: Suzanne Sommers and Barry Manilow, but not together. Now that would be a dinner. [Defamer]

T.G.I. FRIDAY'S: Wow, Victoria Beckham has great taste! She even took the kids to a nice family dinner at the flair-wearing chain. [People]