We're lovers not haters, but sometimes we have to call it like it is. Thus, the Deathwatch. 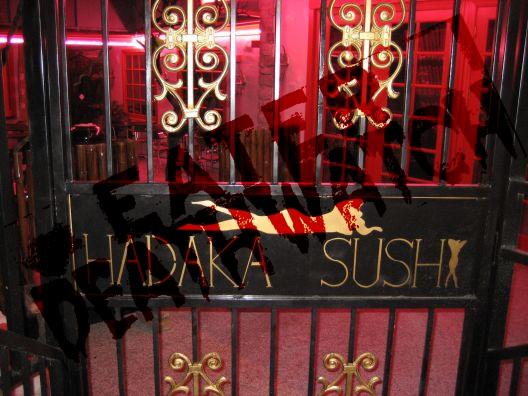 This was really only a matter of time. The idea that sushi and sex could sell, even on the Sunset Strip, was just a little to much to, uh, swallow, and Hadaka Sushi is paying the toll---straight to the Deathwatch. The proof is in all the overly sauced sushi rolls that taste exactly the same, the cheesy server outfits, and the fact that the restaurant always looks empty. Simply put: Gimmicks just don't work. When we tried it---yes, we had to at some point---ours was practically the only table in the joint. After a big trumped up story on the "naked sushi" in the New York Times, the place stands idle. It can't help that the pink neon on the building matches the strip club's a block away. And look how the DW stamp blends right into the red-light space; it's as if they knew.