Share All sharing options for: PLYWOOD: Bank Heist in NoHo, Lark Cake Shop and Intelligentsia in Silver Lake, and MORE

We couldn't go away for the holiday without a little Plywood Report first, now could we? We're cutting out early today to find new ways to stay cool (that yard full of real snow and pools of ice? Yeah. Us.), and if we don't burn all our fingers on sparklers tomorrow, we'll see ya Thursday. 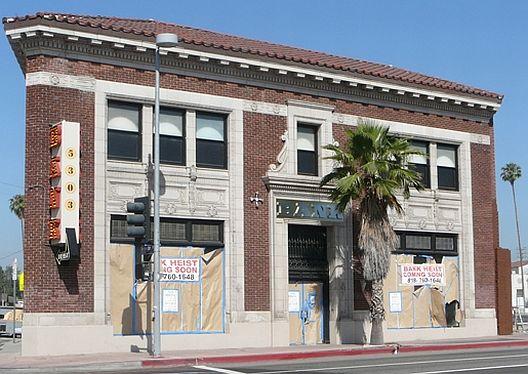 NORTH HOLLYWOOD: A few weeks ago, someone asked if we knew anything about Bank Heist (5303 Lankershim Blvd.), but we forgot about it. Then they sent pictures, which naturally got our attention. Now we have details, too! The Bank Restaurant "and its alter ego Heist Nightclub" comes from one Jason Feld, once involved with the now defunct Dublin's and XES. Bank Heist takes over a former bank, so it has the original large windows and exposed brick walls. The dance floor and stage will be surrounded by VIP suites and two bars. Chef de cuisine comes from the Four Seasons Beverly Hills. There's an opening party on July 19, so we suspect it will be open to the public that weekend. [EaterWire Inbox]

SILVER LAKE: The original April date passed, and then July. So when is will Intelligentsia Coffee outpost finally open at Sunset Junction? Owner Doug Zell tells us that unless the sky falls, August. Considering how hot is today, we can't wait for those patio misters to cool us while we sip on iced coffee. [PLYWOOD]

SILVER LAKE: From a tipster we get news (and pics) about Lark Cake Shop on Sunset. "According to the staff at the shops next door, it's been trying to open for a year and is going to serve 'fancy cakes.' Looks like they're getting closer to an open date from the activity inside." No response from the owners yet, but as soon as we hear more, you will. [PLYWOOD]

DOWNTOWN: With Takami taking over the 21st floor of the 811 Wilshire Building, we also have Maria's Italian Kitchen, a local chain of around 10 restaurants, taking over the street-level Flower Café. Apparently the restaurant applied for a liquor license, so there's that. [PLYWOOD]

DOWNTOWN: Back in December we reported that ex-mayor Richard Riordan filed for a liquor license for the space next to the his all-nighter The Original Pantry. We know it will be called Riordan's, and according to the Downtown News, interviews were taking place in June, so maybe an opening date is around the corner. [POST-PLYWOOD]

DOWNTOWN: An article in Variety a couple weeks ago (written by Eating L.A.'s Pat Saperstein) was chock-full of information: Coming to the L.A. Live complex is a Fleming's Prime Steakhouse, The Farm of Beverly Hills, the new Conga Room, a branch of Celestino Drago's Il Pastaio, another Katsuya, the beer-fest Yard House, and Rosa Mexicano, a "New York-based Mexican restaurant with a David Rockwell design." Also mentioned: Grace and BLD's chef/owner Neal Fraser is consulting with Cedd Moses on the new menu for Cole's, which closed in March for renovations, and a new restaurant beneath the whiskeytastic Seven Grand. [PRE-PLYWOOD]