There's so much happening Downtown, it deserves it's own expanded EaterWire.

THE DISH We caught wind that hizzoner Richard Riordan's new Riordan's Tavern quietly opened last week, and sure enough, it's open! We're told it's reminiscent of a classic New York neighborhood tavern (again with the New York!) with pressed tin ceilings, a mahogany bar, exposed brick walls, distressed wood floors. Read: cozy and completely different from the Original Pantry next door (this was the bakery annex). We don't know too much about the menu yet, but for lunch, there is a carving station with daily changing proteins (lamb, pork, beef, chicken?) for sandwiches on La Brea Bakery breads, and traditional potato salad and cole slaw, and something about good steaks and stiff martinis for dinner. Riordan's is open from 11am to 10pm daily. [EaterWire] 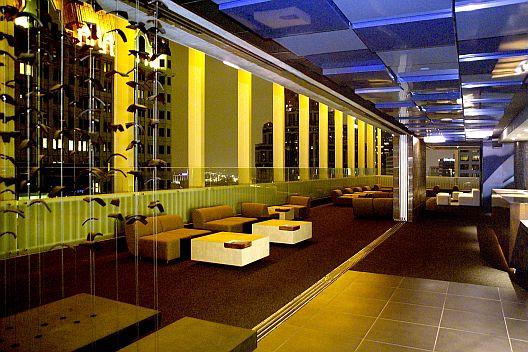 DOWNTOWN: Does everything look better from 21 floors up? You betcha. Finally, Elevate Lounge, the 21st floor partner to Takami Sushi & Robata, will open quietly for private events this week and to the public on August 10. We're told Takami will open shortly after, possibly a week, possibly more. No one wants to give a hard date these days. [Post-Plywood; Thrillist]

DOWNTOWN: While new places debut, one newish one is trying to drum up more business.E3rd Steakhouse, from Zip Fusion's Jason Ha, has some big deals going on right now. There's a wiff of desperation to it all, but if you're in the neighborhood and broke, it's the place for you: 99-cent cocktails daily for happy hour (limited to just one), and buy-one, get-one-free entrees. [EaterWire]