Sorry we're a bit bare today, but we've been busy culling our inbox for all the juicy news. Got something to say? Say it loud, say it proud.

BEVERLY HILLS: We don't exactly have the reason why the switch, but Prego on Camden Dr. is now called Forte. The owners are new, but the menu, staff, and chef is all the same. From a watcher: "We had a feeling things really did not change when we looked inside the restaurant and they were serving bread sticks (just like Prego did)." [EaterWire Inbox]

SANTA MONICA: The whole brouhaha over SBE's interim Montana Lounge has finally ended, as of this weekend. Knowing that Café R&D will soon move in, we got word from our Montana Ave. spy: "I walked by today and saw workmen swarming and a thank-you sign from SBE on the window. SBE notes on the sign that they're looking for more locations, some on the Westside." [EaterWire Inbox]

DOWNTOWN: From Blogdowntown we learn that "acclaimed restaurateur" John Valencia has signed on to bring a 6,000-square-foot restaurant and 5,000-square-foot lounge to the Union Lofts at 8th and Hill. Supposedly going in the former bank building's vault and safety deposit area. From the press release, "John Valencia, is a long-time restaurant, lounge and nightclub operator with a history of success in both Los Angeles and the South Beach section of Miami Beach." Never heard of him, can't find anything about him, but we're all ears if you know. [Blogdowntown] 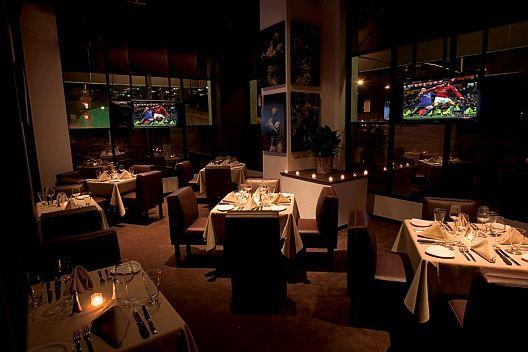 DOWNTOWN: A couple weeks ago a reader asked about Trifecta, why it looked empty, what was going on, and if it was even open. We called and found out from one of the owners why it was closed, the Metromix blog posted faster: Turns out the kitchen was flooded right after it opened, and Trifecta could only stay open for lunch. But someone also tipped us off that the full 47 liquor license hasn't been approved yet, so there's no selling liquor across a bar until that's complete. They hope to reopen by the third week of August if all goes as planned. [EaterWire]

WEST HOLLYWOOD: That spot Winston's owner Andy Fiscella told us about in March? Here's more from Metromix: Still unnamed, it will serve comfort food, have an old-Hollywood vibe, a large patio, and will be located near Winston's between Jones Hollywood and Bar Lubitsch. And in a not-such-a-small-world-afterall coinkydink, one partner is Charlie Lew, also a co-owner of Trifecta. [EaterWire]

WEST HOLLYWOOD: Do you remember that odd spot Tangerine on the corner of Halloway and Sunset? Closed. In it's place, something called Isla is in the works. [EaterWire Inbox]

BRENTWOOD: We almost forgot this from last week: "I was at Taiko in Brentwood last night and noticed that the place across the way, Tongdang looked closed. I just checked out the Tongdang website and sure enough, closed. It's not a shock as they never looked very busy, had a huge space and a lousy name." [EaterWire Inbox]