There's nothing like a good dose of Plywood to start the week off right. See something boarded, papered, signaged? Let us know. 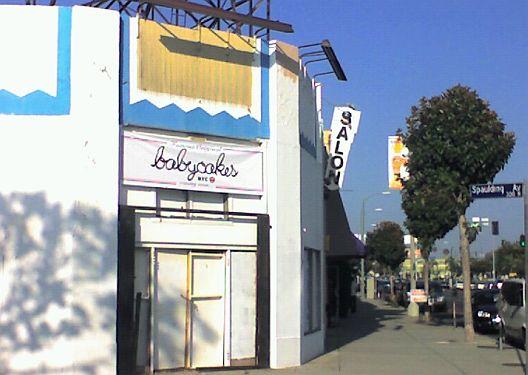 BEVERLY/FAIRFAX: This here is what we call tag-team Plywood watching, friends. From an Eater reader: "While walking my dog tonight I noticed that a sign for Babycakes NYC has gone up on the former Jewish temple on the corner of Beverly Blvd. and Spaulding. Babycakes is a vegan bakery owned by Erin McKenna. I have made one of her brownie recipes before and I loved it, even though I am most definitely not vegan. I think I may have to beef up my exercise routine, since this will be approximately 2 1/2 seconds from where I live." If it's not frozen yogurt, it's a bakery. The pic comes from a Curbed fan who noticed the same thing. [PLYWOOD]

WEST HOLLYWOOD: We stopped by One Sunset last week and talked to owner Erica Cohen about the One Group bringing yet another NYC restaurant to town, their uber-hip steakhouse STK. Since we broke the news a few weeks ago, Cohen decided it was OK to give us more deets. She tells us that they hope to open STK (located in former Bridge spot) by November, "but ONE opened about seven months behind schedule, so we'll see." Also confirmed: Design is by iCrave, but not much has to be done since the paint on Bridge was barely dry. [PLYWOOD]

CENTURY CITY: We have very little to go on here, but these pics of Mamash taking over the former Delmonico's at 9320 W. Pico landed in our inbox, about the same time the ABC listing was posted. We see a Warren Bregman and Brett Miller associated with it, but know absolutely nothing else. Is this the Brett Miller from JRDN in San Diego? And from the pics, is it sushi? Mamash means "really" in Hebrew, if our online dictionaries serve us well. Kosher sushi? Anyone? [PLYWOOD]

WEST HOLLYWOOD: An update for the next big anticipated opening. David Myers' new brasserie Comme Ca is coming along nicely. We're hearing of a cheese bar (but not like Mozza's where you can sit) and an oyster bar (with seats), and a very traditional brasserie menu: escargots, steak frites, steak tartare, lamb tangine. Eventually it will be breakfast, lunch, and dinner, but will probably start slowly. Although the liquor license has been approved, the opening date is still "late August." Keep watching. [PLYWOOD]

WEST HOLLYWOOD: And yet another update: There's serious activity afoot at Bastide. Pots and pans are rattling, tastings are going on, but the menu hasn't been fully decided on yet. Design and décor are pretty much fini, but it sounds like some ideas (communal tables) are yet to be fleshed out. From what we're told, the place was really toned down, it's not as formal. No one will confirm an opening date, but we're not sure anyone really knows. Could be three weeks out, could be more, could be less. [POST-PLYWOOD]