WEST HOLLYWOOD: The Boi From Troy alerts us that after a DOH closure, months of renovations, and several delays, Hugo's finally reopened---with a B rating. Hopefully it's not for the infestation that shut it down in the first place. Boi says it "looks remarkably similar" to the way it looked before. [Boi From Troy] 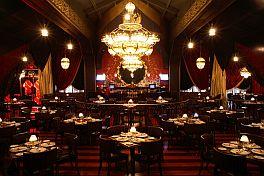 STUDIO CITY: After only a few months, the Russian-themed Romanov Restaurant has a new chef at the helm. A reader sends word that opening exec chef Mark Murillo and some of his crew walked off the job possibly because of pay issues. PR confirms that Murillo is no longer with the company, and that Arturo Paz is the corporate executive chef of Romanov (and Republic), and Manuel Medina is the sous. [EaterWire Inbox]

MID-CITY/GROVE: A little birdie tells us that Shereen Arazm's Terroni, the Canadian-import Italian spot taking over the Authentic Café, will open by the end of the month. Shereen is one busy, busy lady. [EaterWire Inbox]

LOS FELIZ: From an eastside tipster: "A new taco shop has opened, unceremoniously, on Hillhurst, just south of the Cap'n Cork on Prospect, next to Vine Automotive. Walking by the other day I noticed a paper fish hanging from a pole and stopped in. Place serves only shrimp and fish tacos. I had just eaten when I stopped by, but the owner gave me a free fish taco to try and it did hit the spot. They serve them dry and then you add your own cabbage, salsa, creme fraiche and a nifty little radish slaw that is probably the most interesting thing about the place. I drove by today and it appears they have the sign up and are calling the place some variation on Tacos Ensenada." [EaterWire Inbox]

SANTA MONICA: Sometimes special dining nights happen just because a chef wants to do something different, not because they're trying to drum up business. Case in point: Adding on to no-corkage Mondays and farmer's-market Wednesdays, now Josie adds barbecue Tuesdays through the end of August. "Maybe longer, if it turns out to be too much fun." Look for quail, grilled kangaroo ribs, or soft shell crabs. Whatever strikes those gals' fancy. [EaterWire Inbox]

WESTLAKE VILLAGE: Yes, yes. We put froyo, all of it, on the Deathwatch. But we know it can't be stopped. From a reader: "I know you're all busy declaring the Pinkberry fad over, but I just thought you might like to know that Pinkberry is expanding its 'comforting services' out into the Conejo Valley for all the rabbits to enjoy. It seems it'll be opening up on Thousand Oaks Blvd, sort of near to the BCBG Maxazria store & Trader Joe's." Here's the Craigslist ad for anyone that needs to make $8 serving fruit-topped "chilly bliss" this summer. [EaterWire Inbox]