Oh, yes. Fine watering holes have opened all over town, just in time for the weekend. Please, don't drink and Lindsay. Got a new spot to dish on? Let's hear it. 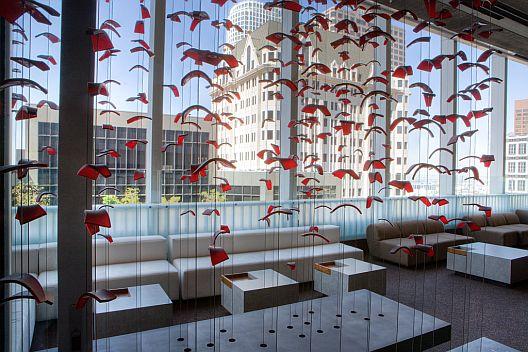 DOWNTOWN: Stuck at our computer for the last 72-hours straight, we had to miss the grand opening party for Elevate Lounge the other night. Bum-mer. But blogdowntown went and has some smashing pictures of the place. We love seeing the evolution from this to this. Elevate opens to the public tonight at 9pm; its sister restaurant, Takami Sushi & Robata, opens next Saturday, August 18. Those afraid of heights (21 floors up), need not apply. [811 Wilshire Blvd., entrance on Lebanon St., between Flower and Figueroa, 213.236.9600]

LOS FELIZ: Taking over the La Estrada spot in Atwater Village, we have The Griffin. From Thrillist: "Decked out with domed brick ceilings and red leather booths, The Griffin's a polished European tavern that in true Continental fashion facilitates drinking no matter the occasion. Behind the walnut bar a healthy selection of whiskeys and single malts complements the usual European tap beer suspects ranging from easy-drinking Peroni to rich, creamy Boddingtons." Here's a bit from Yelp, too. [3000 Los Feliz Blvd., 323.644.0444]

HOLLYWOOD: The presto-changeo over at the short-lived Sideways, which officially shuttered in March, is finally complete: Johnny Zander's Green Door is open. Metromix reported a soft open last month, but it was Daily Candied today. [1439 Ivar Ave., 323.463.0008]

HOLLYWOOD: For once, all the newsletters feature a different location on the same day. Amazing! UrbanDaddy says Vice opens in the former Star Shoes spot tonight. We thought it was called Chill, but what do we know. More loungey, not clubby, it's supposedly a place without attitude: "Owner Steve Fowler, a former promoter at Cabana Club and Les Deux, promises to keep the velvet-rope touches to a minimum: no flashlight-giddy bouncers, no tooth-sucking attitude and the most reasonably priced bottle service you'll find outside of a liquor store." [6364 Hollywood Blvd., 323.462.7827)