Hell's Kitchen Winner REVEAL: Milking the Secret for All Its Worth

Share All sharing options for: Hell's Kitchen Winner REVEAL: Milking the Secret for All Its Worth

Last night Eater co-hosted a party for Hell's Kitchen local contestant Bonnie Muirhead at Tanzore, and we, like everyone else, were really just in it for the free snacks and cocktails. The room was at least 90% friends and family of the nanny/personal chef; a few Eater fans and fellow bloggers (we talked to Caroline on Crack, The Kinfe, Food Marathon, Deep End Dining) were scattered about. When the final moments of the show aired on giant screens in front of everyone, Bonnie's friends gathered around her, holding hands, hugging, seemingly on pins and needles. The most amazing thing to us: They didn't know if she won or lost. By nature, we're pure gossip, we can't keep a secret, so this blows our blogger minds away. The one-time actress played along (she's biting her finger in the bottom right-hand corner) and let the suspense unfold. But in reality, we think all she really wanted was for the show to end already. 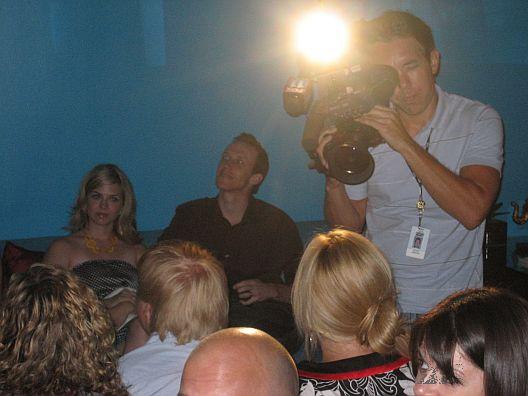 Even more shocking: We think FOX News 11 didn't know if she won or lost the competition. A reporter and cameraman interviewed Bonnie before the party, filmed during it, but as they heard she lost (while still in the van outside), the antenna went down and *poof* that was it. Did the local news affiliate not know she lost? They work for FOX.Then again, when Good Day LA interviewed the nanny the other morning, they repeatedly spelled and pronounced her name wrong and could barely muster enthusiasm. We hear that's sort of indicative of how HK treats all of the contestants. Later we'll have Bonnie's thoughts on the show now that it's over and she can move on---just not to Vegas.
· Hell's Kitchen Finale: Bonnie, the Happiest Loser [~ELA~]
· Bonnie on Eater LA [~ELA~]

Thanks to Tanzore for their service, space, and great food last night, and Charbay vodka for keeping us all lit.