Share All sharing options for: Eater StarWatch: Ryan Phillippe Shut Out of Ritual, Leo Opens the Green Door, Entourage at Urth and MORE

See a celeb inside your friendly neighborhood hotspot? Or better yet, get denied at the door? Our StarWatch appetite is sated by details like these, so please, pass them along. 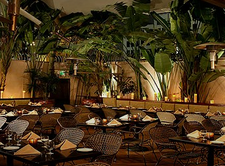 RITUAL: Last Thursday night Ryan Phillippe stopped by the Cahuenga club but had a bit of trouble negotiating the velvet rope. Says our tipster: "He showed up alone and didn’t get in at first because no one recognized him with his beard. He had to call one of his friends who was already inside, and his friend had to come outside and get him." [StarWatch Inbox]

GREEN DOOR: After the premiere party at the Cabana Club for his green film, The 11th Hour, Leonardo DiCaprio stuck with the theme by heading to the "green" lounge next door with Chris Breed, who owns both places. [Buzz Clubs]

URTH CAFFE: Wow, Vince even eats there in real life! Adrian Grenier brunching at the Melrose location on Monday with two other guys. No word if a giant Urth Caffe truck just happened to be parked behind them. [Defamer]

MAGNOLIA: Apparently you can find all sorts of pretty ladies at this Hollywood restaurant. Halle Berry, Ali Larter and Dita Von Teese were all spotted there last week. [Planet Gossip]