Eater StarWatch: Hilary Swank and Avril at Craft, Britney Stiffs One, Alanis at Katsuya and MORE

Share All sharing options for: Eater StarWatch: Hilary Swank and Avril at Craft, Britney Stiffs One, Alanis at Katsuya and MORE

Alas, some stars forget to tip, but we know you never do. We'll take our 20% in the form of StarWatch sightings right here. 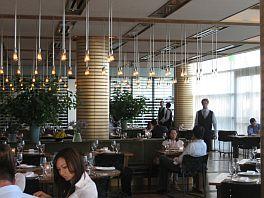 CRAFT: Next time you book a dinner at Tom C.'s hotspot, try reserving what appears to be the VIP table—the back left booth, closest to the kitchen, says our informant. "They allow the big stars to come in through the kitchen so they don't have to be eyeballed by the entire restaurant." On Tuesday night that's where Hilary Swank was seated, and immediately afterwards, Avril Lavigne. Only Hil used the back door. [StarWatch Inbox]

ONE SUNSET: Mother of the Year Britney Spears and friends dined on a finger-licking meal at the Sunset Strip restaurant Saturday, washed it down with vodka Red Bulls, forgot to leave a tip, then accused the staff of stealing her missing camera. It was in her car. Silly Britty! [Planet Gossip]

THE LODGE: Nick Lachey and Vanessa Minillo keeping quiet as they emerged from the Beverly Hills steakhouse. [X17]

IL SOLE: So do Friends eat for free here or something? David Schwimmer is the latest in a long line of cast members to be spotted. [Planet Gossip]