See, we promised some dish, we give you The Dish. Let us know if a new restuarant opened in your neighborhood. Say it, don't spray it. 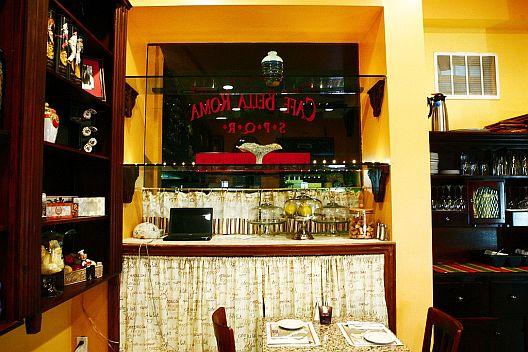 BEVERLYWOOD: Can a city have too much Italian? Bella Roma SPQR opened in June, but we like the picture so much we don't mind being late. According to the website, chef Roberto Amico hails from Clafoutis, Cafe Midi & Mulholland Grill and offers a "menu of traditional Roman cuisine as well as customary Italian favorites such as Cornetti, Tramezzini, Suppli al Telefono, Salumi & Antipasti." We also learn that "SPQR" appears in the coat of arms of the city of Rome, and most importantly on the flags and banners of the Italian football club A.S. Roma, which the chef followed to LA in 1994. [1513 S. Robertson Blvd., 310.277.7662]

PASADENA: When we checked out the now-empty La Fornaretta in Old Town, which fell victim to Scientologists, we noted Plywood on the little spot around the corner that used to be a sushi restaurant (and before that barbecue). Tani finally debuted in its place, a fusion Japanese spot. The owners also have Blue Fish in Montrose. [58 E Colorado Blvd., 626.578.9493]