Share All sharing options for: Eater StarWatch: Big Love at The York, Bobby Brown at Birds, Paul Rudd at Mozza and MORE

Spot a star humpin' around your local restaurant? Send every little step they take directly to our StarWatch inbox. 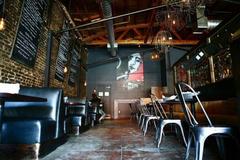 THE YORK: Looks like the Mormons have discovered the Highland Park hotspot...or at least those who play them on TV. We spotted Joel McKinnon Miller, the polygamous Don Embry on HBO's Big Love, on Friday. He wore Tevas, looked tan, and drank his beer with a lady friend (just one!). He was forced to listen to the busybody rants of some woman who held court near the windows. Then he waited in line at the bar, just like the rest of us, trying to get his check from the under-staffed, overworked bartenders. [StarWatch Inbox]

BIRDS: A very Whitney-less Bobby Brown dined alfresco with a friend at the Hollywood restaurant Saturday, says a keen tipster: "The entire meal he watched every female that walked by, talking to most and signaling to one woman with large fake boobs. She was with a friend and seemed to not have much interest in him. Nevertheless he stared, gawked and signaled for her to come over to the table while she waited for the valet to bring her car to the front." It couldn't have been what he was putting in his mouth, could it?: Newports, one drink, one bottle of Budweiser, French onion soup and a half-order of onion rings. [StarWatch Inbox]

MOZZA: Even Paul Rudd and his wife, with another couple, had to wait for a table. Stars, they're just like us! [Defamer]

PINK TACO: Beauty Halle Berry lunched in the Century City mall with her boyfriend. Do you think she's a VIP? [Defamer]

4100 CLUB: During Sunset Junction on Saturday, Kiefer Sutherland was either "sad-sack" and "sitting alone" or "with friends on the outdoor patio, partying appropriately," depending on the time. [Defamer]

THE IVY: Sure, the Robertson Blvd. restaurant is always packed with celebs, but Elle MacPherson and Joss Stone got their pictures snapped there this week. [Splash] [Splash]