BEVERLY HILLS: From one of the Craigslist want ads: "Sno:la is a gourmet frozen yogurt emporium in the heart of Beverly Hills that will open in late August. We’ve spent a year developing lots of gourmet flavors (including the classic tart Italian flavor) and 40+ mostly organic toppings to bring a gourmet, organic, healthful product to market. Snola will truly be 'the Beverly Hills of Yogurt Stores.'" At least they didn't go with the color/fruit/berry/berri name, but let's hope they don't start a punctuation trend. Located near the old RJ's (soon to be LA Food Show), Snola was supposed to open in May. [FroyoWire] 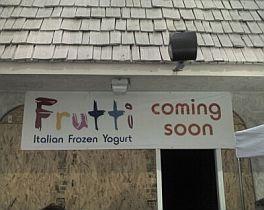 GLENDALE: Reader Michael who's been watching two frozen yogurt shops develop a mere 100-feet away from each other on Brand Boulevard sent along this snap of Frutti and a note: "There had been no signage until today. I've included a pic of the one closest to Starbucks. Interestingly, the store that has the sign up is MUCH further behind than the one with no sign closer to Famima." You'll have all the froyo you can stomach soon, my pet. Soon. Last time, Michael found out that the other is named Dolci Mango. [FroyoWire Inbox]