Share All sharing options for: Eater in Vegas: Cut and Trotter Going to Venetian, Guy Savoy Gets Casual, Restaurant Week and MORE

Every now and then we'll dip our toes in the Vegas scene, especially when it pertains to LA. And this weekend, it's a biggie with the Britney-mess "hosting" the opening of LAX at the Luxor and the city's first Restaurant Week beginning on Sunday. We can't cover it all, but we'll dish on what we can. Got something to add? Let us know. 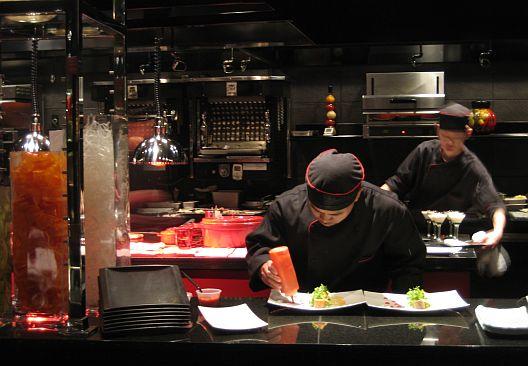 RESTAURANT WEEK: We won't lie: We like Vegas and especially dining in Vegas. It's the reason we go. But it is 'spensive with all the high-profile chefs out there now, so the first annual Restaurant Week (Sept. 2-8) really piques our interest. Like in other cities, you get prix fixe meals at most restaurants and special events at others with proceeds going to charity (Three Square, which feeds the Nevada hungry). $50.07 dinners at places like L' Atelier de Joel Robuchon, Mix, Craftsteak, David Burke, Mesa Grill, Fleur de Lys, Simon, and Social House is a bargain, considering you usually can't get out of those places with an app and a cocktail for less than $50. Check out the full list of restaurants and special menus. [EaterWire]

PALAZZO AT THE VENETIAN: Now for some news?Wolfgang Puck will open a second outpost of Cut at the new Palazzo, which has been under construction next to the Venetian forever. According to Puck corporate PR, Cut should open in December when the resort does. Thank god Tom and Katie have someplace to eat in Vegas now. [EaterWire/JBF Dateline]

THE VENETIAN: After giving it a go at the MGM several years ago, Charlie Trotter returns to Vegas with the 100-seat Restaurant Charlie in November. The chef says of the 18-seat adjacent Bar Charlie: Customers can sidle up, order a "hot crab salad with lemongrass essence and split a bottle of Cristal and be out of there." Sure, why the hell not. [Chicago Sun-Times]

CAESARS: The posh Guy Savoy goes a bit more untucked with its new Bubbles Lounge that sits off of the main dining room. According to the release, the menu is separated into “Small Bites” for $25 for two items, $30 for three items, and $40 for four items; “Big Bites” are $18 - $35; “Sweet Bites” are $10. Add up enough bites, and you'll pay almost as much as you would to sit in the dining room. Wonder if Hung will be there? [EaterWire Inbox]

FASHION SHOW MALL: Something called Stripburger opened on the sidewalk-side of the mall across from the Wynn. It's all open air, which must be brute.tale. in the summer, but probably nice at night. It has misters. [LV Review Journal]

LUXOR: Ok, so the Luxor is the next MGM Mirage property to try and shed its theme-park past. The pyramid will still be a pyramid, but inside the kitschy theme will be history, starting with the restaurants and nightclubs. Biggest LA/Vegas connection: Pure Management Group opens LAX with DJ AM this Friday, and queen of all drama Britney is "hosting" (for an undisclosed amount of money). The Pure group is also behind Noir Bar, which opens this weekend; Company, a 10,000-square-foot American bistro backed by Nicky Hilton, Nick Lachey and Wilmer Valderrama (Oct.); Thomas Schoos designed Flight lounge next to LAX (open) and the Luxor Steakhouse (March 2008); and Kerry Simon is involved with the resto-lounge CatHouse (this fall). [EaterWire]

WYNN: The nightclub Lure has been transformed into Blush, but it honestly doesn't sound much different than Lure. This isn't the hottest club at the Wynn (that would be Tryst), but right off the casino floor with a nice patio, it's not bad. [Thrillist]