The last time we did a Deathwatch, one offended reader called us the "bully kicking the handicapped kid at school." First, 'handicapped' isn't PC; it's 'disabled' or 'with disabilities' now. And that's fitting. Second, this isn't about kicking anyone when they're down; we don't condone the death, but we do watch the restaurant circle of life very closely. There's a fine line between the Deathwatch and a 1500-word review that leaves a restaurant limp with barely a half a star. We just call it like we see it. For an extra special bonus today: We're throwing you, the readers, the comments section. Comment away! 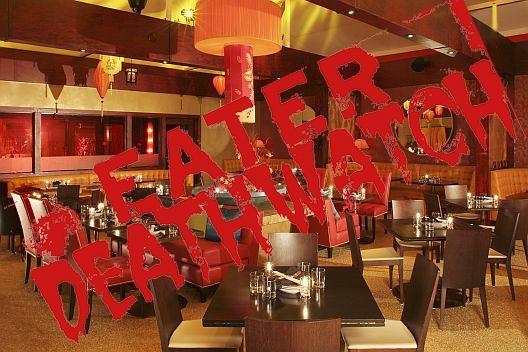 There's always someone who thinks their restaurant concept will break the rotation of a cursed spot. Tim and Liza Goodell's Red Pearl Kitchen is one of those ideas. The none-too-serious pan-Asian concept works for the couple in Huntington Beach and San Diego, but here, it seemed more a quick fix for the ailing Meson G on Melrose. We actually liked Meson G; it was well designed, Joseph Centeno was doing his thing, but something wasn't working. It lasted all of two years. Red Pearl Kitchen opened last fall, and probably won't last more than year. Maybe it's the location. This was home to Michel Richard's Citrus from 1986 to 2001, then Alex Scrimgeour opened Alex, which went away by 2004. Not that these were cursed restaurants, but each one lost stars and closed earlier than the one before it. We're still leafing through our Eater Deathwatch Manual sent from New York, but those are just a few sure signs of trouble.

Sitting in the shadow of the Mozza behemoth a block away can't be easy. A few weeks ago, the restaurant sent out a coupon for $20 off any meal for the month of August (good until Friday!). And then there are the Eater reader reports: "We stopped in a few weeks ago after a movie around 10 and got the look like please don’t come in and make us stay open for just you.....So we left." Sadly, it was the special surprise dumplings that clinched it this time. From the Tuna Toast blog: "That excitement quickly faded, however, after I took my first bite and realized that the filling completely mushy. Luckily, I took a look at the inside of my half-eaten pot stickers and figured out why- the ground chicken was raw. Yup. Raw chicken." Oooph. ETD: Thanksgiving.