Just a little Ply to take home for the weekend. Don't grill it too long or it will stick. See something papered, boarded, signaged? Let us know.

DOWNTOWN: More and more upscale places planned for downtown. A reader tipped us off that the owner of Mi Piace and a major player with the Sushi Roku group will open a restaurant in mid-2008. The LA Downtown News reported in May that Armen Shirvanian and Michael Cardenas are indeed working on something together, possibly in a 12,000-square-foot spot at Sixth and Olive streets. Shirvanian's Mi Piaci is one of those always busy Old Town Italian spots in the Dena, and Cardenas is a huge facet to Innovative Dining Group's Roku/Katana/Boa empire, so this could be a powerful combination. [PRE-PLYWOOD] 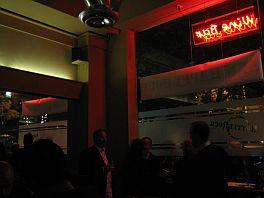 DOWNTOWN: In that same LADN article, we learn that Chaya Brasserie has an outpost planned for the City National Plaza, that BottleRock will open on the ground floor of the Met Lofts (which we knew), and that Bill Chait, founder of Louise's Trattorias and Spark Woodfire Grill, plans Rivera 26 in the same building. [PRE-PLYWOOD]

WESTWOOD: Back in April we reported that the Yamato Restaurant Group took over the former Eurochow space. Today we get a message with a few more details: "They are intending to put in a fine dining Japanese restaurant there. I asked if that meant putting in a restaurant serving Kaiseki or Izakaya, and they said that they were still formulating the concept but would probably include elements of both if not an outright Kaiseki restaurant. It would be nice for Los Angeles to have our own true kaiseki, al ittle Kyoto in LA, and maybe finally LA would have a true "authentic" Japanese restaurant that could separate the riff from the raff and leave all the "posing posers" to Koi." Aren't there a lot of authentic non-poser Japanese spots in Little Tokyo? We digress...[PLYWOOD]