Yes, we brazenly claimed the Swirling Point has been reached, but someone didn't get the message. LA will soon be covered in some melty toxic goo, but until then the frozen yogurt/nogurt continues to ooze. It's so sticky, even Nightline took notice. 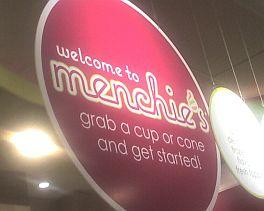 VALLEY VILLAGE: We're cleaning out the froyo inbox and came across this from a few weeks ago (apologies to Michael). He went to Menchie's, a new frozen yogurt shop for anyone who thinks Pinkberry serves a skimply hollow swirl: "You walk in, grab a cup or cone and start piling on as much yogurt, as many flavors, as many toppings and syrups as you want...Then bring it up to the register, they weigh it and you pay. The flavors I tasted were all great, lots of choices including non-fat, sugar-free and kosher." Self-serve soft serve. It's like hitting the Whole Foods salad bar: You go for in for a cheap healthy lunch and leave with a $15 box of everything. [EaterWire Inbox]

HOLLYWOOD: We already knew that Cefiore will open in Hollywood in mid-August, but the a company rep tells us that it's not stopping there: "We have many more in the works: 2 in Huntington Beach, 2 in Las Vegas, and 1 in Arcadia, Rowland Heights, and Fullerton. We have about 7 other LA locations in the works too." [EaterWire Inbox]

TOPANGA: Hard to believe, but Pinkberry does have its detractors: "I just got back from NY and was craving a Pinkberry. I was by the Topanga mall and decided to stop by and give the new location a try. Here were my problems. I saw that the have mixed Dole canned pineapple with fresh in the case, with the color of the canned grayish brown and the fresh being overtaken. Second the yogurt was over-frozen and didn't have enough green tea flavor. And third, they were very cheap on the yogurt portions and cheap on the topping amounts. And last thing was they didn't have the green tea powder to put on top of the yogurt." At least you know that like Starbucks, there are at least 20 more nearby. [EaterWire Inbox]

SANTA MONICA/CULVER CITY: Of course, there are plenty of people who don’t care what the haters say. Like the owners: "Can't get away from these places but there is a sign on Main Street in Santa Monica for a Pinkberry, across from Wildflower Pizza. And there's a brand new remodeling notice for Red Mango in the strip mall on Venice and Motor, two stores down from the Coffee Bean." Yeah, that Red Mango we knew about, and there are more coming: West LA, Mid-City, Koreatown, Northridge, Valencia and we're sure many, many more. [EaterWire Inbox]

WEST HOLLYWOOD: Our big brother Curbed got word about another Pinkberry opening in WeHo, because you know, it is the vortex. One is moving in near the Crunch/Virgin Megastore/Laemmle 5 complex. [Curbed LA]

CENTURY CITY: And last but not least, the Pinkberry at the Westfield Century City mall opened today, according to the newsletter we just got. All the assistants can now scramble for yet another item for their bosses. As we reported a few months ago, it's near Bloomingdale's. [EaterWire]