Share All sharing options for: Eater StarWatch: Leo, Tobey, Hopkins and Hunt at Katsuya, Turtle at Table 8 and MORE

Now that Nicole's knocked up and Lindsay's put away for a bit, it's safe to go back in the water. See a celeb hit the dining scene? Then please, tip away. 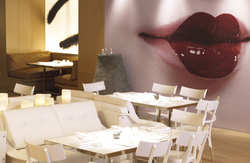 KATSUYA: It's been a blockbuster week at the Brentwood sushi spot. Seen one night were Tobey Maguire, Avril Lavigne and an etiquette-minded Leonardo DiCaprio, who told a neighboring diner to stop using his BlackBerry. On Tuesday, Anthony Hopkins, Helen Hunt and David Moscow, the guy who played young Tom Hanks in Big. [StarWatch Inbox] [Defamer]

TABLE 8: A tipster saw Jerry Ferrara, Turtle from Entourage, enjoying a porterhouse at the Melrose steakhouse last week. "Asked my waiter about it and apparently he loves the meat. Do Turtles even eat meat?" [StarWatch Inbox]

SPITZ: That Joel McKinnon Miller is the mayor of just-opened Eastside eateries. A keen eye spotted him at the Eagle Rock kebab house: "He was dining with a women, she was shorter than him and had long black hair. He was kicking it in a "Hawaiianesque" shirt, ripped jean shorts and Jesus sandals. I think I may have spied him there once before." [StarWatch Inbox]

TRA DI NOI: Governator Arnold Schwarzenegger and Maria Shriver celebrating a birthday in Malibu with a dozen people, Italian fare and a large fish ice sculpture on their table. [Defamer]

LUCQUES: Andy Dick enjoyed a fancy lunch at the West Hollywood restaurant. And it appears he even behaved. [Defamer]

MR. CHOW: Before he hits the road for his first world tour in a decade, Stevie Wonder hit Beverly Hills for dinner. [Splash]