The Dish: Porta Via Opens in the Dena, The Del in Playa, CeFiore Hollywood, and SM's V Lounge

Share All sharing options for: The Dish: Porta Via Opens in the Dena, The Del in Playa, CeFiore Hollywood, and SM's V Lounge

You know how Steve Martin goes crazy when the new phone book arrives in "The Jerk?" Yeah, that's how we feel with the Dish. See something debut? Let us know. 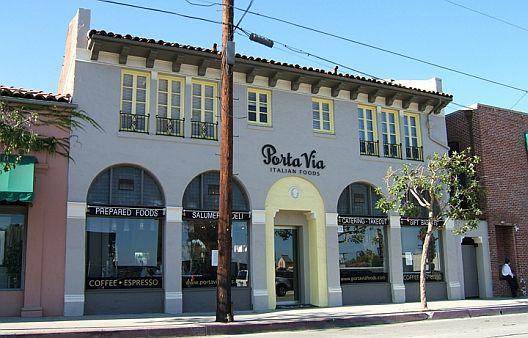 PASADENA: Well finally, a concept that isn't a chain. Porta Via Foods just opened this week near the corner of Fair Oaks and California. A reader sends word (and a pic): "It looks quite good. They have a great selection of panini, antipasti, pastas, and main courses (examples - Osso Buco, Baked Halibut, Lamb Shank, Bakes Scallops). Take-out and eat-in available. They have a nice shaded patio for dining. I forgot to ask the hours." Well we didn't. Here's the story: Owned by Pasadena restaurateur Victor Ciulla, who was the CEO of Twin Palms until recently among other things, and New York transplant John Weithas, whose wife is a fourth-generation San Marino-an (talk about built-in clientele). The Patina Group's former corporate exec chef Octavio Beccera consulted on the menu. Weithas told us it's been busy these first few days, especially at lunch when Italian-American classics like meatballs, eggplant or chicken parm, and manicotti are the big hits, but the high-end stuff like osso bucco is popular for dinners. There's something about paying per pound. The café is currently open 11:30am to 7pm, Mon-Fri, and will be closed for the next two weekends. By August 20, it will be 7am to 7pm and open on weekends. [1 California Blvd., 626.793.9000, www.portaviafoods.com]

PLAYA DEL REY: All the way on the other side of town, The Del, the new venture from The Brig and Beechwood owners David Reiss and Jeffrey Best, quietly opened in the former Marina Room space. From a tipster: "Someone my girlfriend works with said it's been open for months even though there's nothing on the big sign outside, and no website -- no promotion at all. The longest soft opening ever? Is that what you guys call it? The dining room is less than half done but the bar area is not too bad. It does NOT appear at this time to be a "high end tequila bar" but who knows what will happen." When we posted news about The Del in April, there's was a Craigslist ad looking for a chef. Guess they found one: Our tipster Darrin also Yelped about it, and said the burger was quite good. [119 Culver Blvd., Playa del Rey, 310.823.9535] 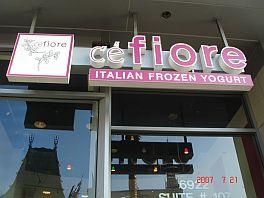 HOLLYWOOD: Frozen Yogurt Wars continue: CeFiore opened in the former Gelato Paradiso this week, softly. We hear there's still some cosmetic work to be done, but if you're hankering for the froyo and you're on the boulevard, it's there. For the record: We don't think frozen yogurt should ever overtake gelato. [6922 Hollywood Blvd., 323.465.9097]

SANTA MONICA: A new lounge opens on August 9 in the former Club 2020, and before that Lush, spot. The most interesting thing we found about V-Lounge is that chef Brian Hill, from Top Chef Season 1 consulted on the menu. Do you remember Hill? He was gone by week three, but he's an LA-based caterer and private chef for celebs like Eddie Murphy and Mary J. Blige. The same owner, Farouk Ghandi, decided to change things up a bit and added a new décor and offerings. DJ Caroline D’Amore spins for the grand opening party tomorrow night, which our friends at Metromix think will attract Paris Hilton. Is that good or bad these days? [2020 Wilshire Blvd., www.vloungela.com]