Share All sharing options for: Eater's Journal: One Sunset

Here we have another installment of Eater's Journal. We dine out way more than we can afford, we might as well talk about it. 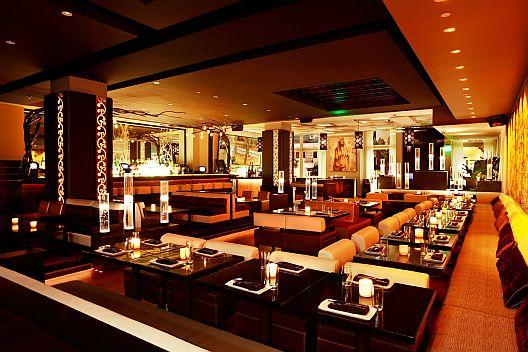 When someone tells us to pick the restaurant for a night out, One Sunset isn't the place that comes to mind first. But because we like chef Chris Ennis, and because our guest has been to the original One in the Meatpacking District, the time was right. One debuted in the former Barfly space in June, the self-proclaimed "one stop destination" for dining and nightlife. Waiting for us, our guest sends a text from the bar, "This place is amazing in the best worst way," so we expected it to be much worse than it was. He said it was "douchey" even by LA standards; we found it to be typical Sunset Strip. Everyone's attractive, couples on dates where the girl didn't eat a thing; gaggles of sluttily dressed girls; guys trying to look 15 years younger than they are. The breakdown: Tables way to close together, music way too loud, food more embellished than it has to be, all very fitting for the Strip. Our guest said he expected to see One on the Deathwatch list the next day, but we're not that trigger happy.

The room has nice flow, from the front bar to the lounge/dining tables all the way to the candlelit wall in the back lounge. The banquettes, however, have too many tables. No one's comfortable sitting so close to one another, and there's no getting out gracefully. Even the size-0 woman next to us needed to rearrange the tables to depart and still couldn't move without knocking our drinks a little bit. There were empty tables along our row the entire night, so why put so many in? For the record: Bad lighting is our peeve, not loud restaurants. Except here. While a DJ played a fun mix (you'll always get us with classic Prince), it was way too loud. When an entire banquette vibrates, like a homey driving down a quiet neighborhood street setting off car alarms with his base, it's just plain annoying.

On paper, the menu sounds interesting if not overwhelming with choices. This isn't intellectual food by any stretch, more like twists on the typical tartares and comfort bar fare. We tried a lot of everything across the board, including "Erica's Badass Burgers," which Extra (and owner Erica Cohen) say are the "must have." Like everything else, the two sliders aren't "must have" in the sense that you must drive across town and have them this very second, but they're decent. In fact, everything we tried was decent, (except for the mac and cheese which was just not good). But almost every dish had one unnecessary extra something. We go back to our favorite analogy: Like a woman who gets dressed for a big night out and looks in the mirror to take off the first thing she sees, a chef should take off the first ingredient that adds nothing to the plate. The grapefruit carpaccio is lovely with Dungeness crab, why so much avocado? Seared ahi is cooked perfectly, but what's with the flavorless sauce draped over top? Not deal breakers, just...why. We're not sure if it's all chef Ennis' fault; One is in a restaurant group, there must be standards and expectations he has to adhere to. With that said, Ennis is great with seafood, and we enjoyed the John Dory and the scallops, as well as the pulled pork sloppy Joes on sweet rolls (because of its simplicity), and the odd chicken oyster Rockefeller, which owner Cohen insisted we try. For One's debut, PR really pushed the restaurant component, and most people we saw were eating, but when it was time for lounge/club hour, the place wasn't full. Exactly the opposite of our first visit.

The owners promised one-stop shopping for a night out, and in that respect they deliver---you can eat and drink and dance all in one place, should you choose. But maybe Angelenos like to move around. We're a fickle bunch. In the end, One really isn't a new concept for LA, it's just one more trendy location. More takes from Yelp and LAT.
· One Sunset Day 1: Our Take [~ELA~]