Share All sharing options for: Top Chef SPOILER ALERT: Is CJ a Finalist?

We've toyed with the question before, but we never had much proof. Everytime we think we have a spoiler, it's really all speculation. But this time it's goooood speculation. Here's what we know: After safely playing the middle for most of the season, Top Chef contestant Chris "CJ" Jacobson finally stepped out and made it to the final six. He's now considered a "personality," not just because of our enlightening interviews with the Venice chef, but because watchers think he's Machiavellian. The message boards love to hate him. We know that he traveled near the Rocky Mountains when TC3 shot the final elmination round in Aspen. We also know that there's no way in hell anyone from Food & Wine, Bravo or Venice Beach will confirm or deny it, but did someone inadvertently lead us to CJ's Top Chef fate? 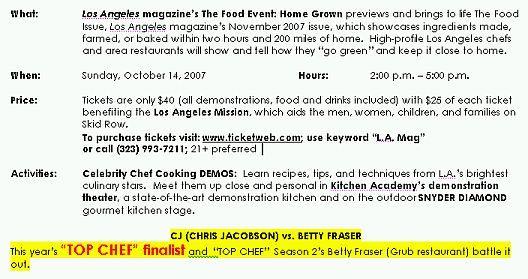 The originator of this press release surely doesn't realize how different the words finalist and contestant are to a TC fan, but let's just assume they wrote what they were told. Note the October date. The live finale date is still under wraps, but by October we should know the show's outcome. Technically, if this release was sent just a few weeks later, it would be correct, if CJ really were a finalist. Also note the absence of the word winner. On a side note, we're excited to see Badabing Betty (Grub and As You Like It Catering owner Betty Fraser) battle against CJ in person. At least we're not the only local media embracing the two.
· The CJ Chronicles [~ELA~]