Pebble Beach Food & Wine: Like F&W's Aspen and Puck's AWFF Rolled Into One

Share All sharing options for: Pebble Beach Food & Wine: Like F&W's Aspen and Puck's AWFF Rolled Into One

We'll occasionally plug certain events, especially when we find them particularly worthy of our time and effort and your dollars. A few weeks ago, we mentioned Wolfgang Puck's Amercian Wine & Food Fest, which takes place on September 29. (Tckets are still available for that and the Friday night Red Seven event.) Always a fun event, good food, lots of booze. Get a driver. 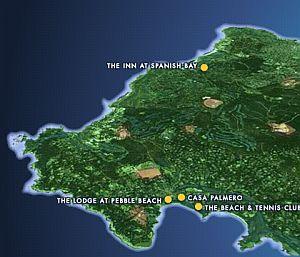 We're not saying this one is better, but it's jaw-dropping for chef starfuckers. In March, the inaugural four-day Pebble Beach Food & Wine takes place at several venues around the 17-Mile Drive and includes guest chef luncheons, cooking classes with Thomas Keller, Todd English, our pal Tom Colicchio, Cat Cora and Ming Tsai; wine tastings, wine dinners, and a grand tasting. Also participating, Hubert Keller, Rick Tramonto, Charlie Trotter, Eric Ripert, Jacques and Claudine Pepin, Michel Richard, Michael Mina, Susan Spicer, Bastide's Walter Manzke, and chefs from The Slanted Door, Gary Danko, and Babbo. That's just a taste. No doubt the majority of chefs had "Pebble Beach...golf...March" in mind when they agreed to this. Tickets are up there: Individual events start at $165; some are only included in packages, which range from $995 to $12,400. Yes, we said $12,400, but it's for a three-night stay at some luxury resort, VIP passes to all events and after-hour parties with the chefs. Hey, cooking with Thomas Keller doesn't come cheap.