Share All sharing options for: TrendWatch: The New 24 Hour Restaurant

Suddenly all-night is in. For a city that's known to sleep, and early we might add, we have some standards and standbys for that much-needed hit of 3am grease---Mel's, Fred 62, Denny's---but that's just not enough anymore. Enter the new 24/7 restaurant, coming to a (most likely Hollywood) corner near you. 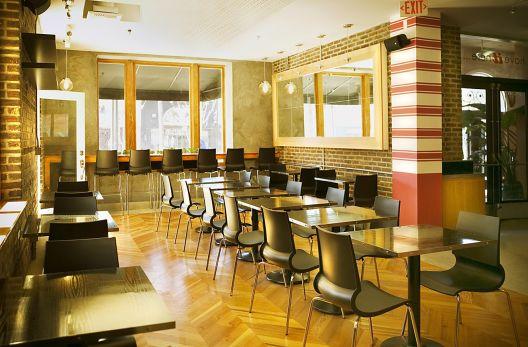 HOLLYWOOD: Steve Adelman's Lift opened in the Hillview Apartments on Monday. He told us it's all about "quick, convenient and easy," as attested by the different ways to get the food: sit down, drive up, grab-and-go, and for those who live upstairs, in-room service. Just breakfast and lunch for now, dinner in a few weeks, and all-night after that. [6531 Hollywood Blvd., 323.469.1848]

HOLLYWOOD: The guys behind Cinespace know how brutal it can be walking out of there at 2am, so they cleverly positioned Kitchen 24 right around the corner on Cahuenga. Full bar during alcohol-serving hours. Last we heard, it should open this fall. [1608 N. Cahuenga]

HOLLYWOOD: The Roosevelt Hotel's build-your-own-burgerteria 25 Degrees recently went 24/7 to serve the graveyard shift partiers spilling out of Teddy's. There's a breakfast menu to provide sustenance during those painful pre-burger hours, too. [7000 Hollywood Blvd., 323.785.7244]

DOWNTOWN: According to the Downtown Scene, the owner of Royale plans to open Mode, a 24-hour restaurant with a "40-foot runway, model-like servers and a 'French diner' serving foie gras and duck confit." That'll hit the spot after those Jager shots at the Gopher. [916 S. Olive St.]