Forget the Emmys. Your local eatery is the best place to see stars embarrass themselves. If you see something, say something. 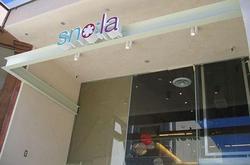 sno:LA: One of the first people to stick their tongues into the Beverly Hills froyo was Kate Bosworth, who our tipster thinks tried the mango. "When the manager asked her if she liked it she said 'Yes, it's very tasty.'" [StarWatch Inbox]

HIDDEN: Not very hidden last weekend at the Santa Monica restaurant was none other than Meryl Streep. [StarWatch Inbox]

CRAFT: Celebrichef Tom Colicchio was working the room when Flight of the Conchords' Bret McKenzie and Jemaine Clement showed up for lunch. [StarWatch Inbox]

WOKCANO: More Conchords! "Tall bespectacled dude [Jemaine Clement] with the girl who plays their stalker [Kristen Schaal] and a non-Conchord friend" having a good time in Century City on Third St. [StarWatch Inbox]

HOOTERS: Flirting with his hot brunette waitress at the Hollywood hot pants showroom was Keanu Reeves. It even looked like they exchanged numbers. [Defamer]

CHATEAU MARMONT: We're not even sure if this is real, but it sure sounds like our favorite trainwreck. Britney Spears was supposedly bounced from the Chateau for smearing food all over her face. Classic Brit. [MSN]

JOAN'S ON THIRD: Smooth talker Scott Cann sitting outside, flirting with the woman at the table behind him. [StarWatch Inbox]

KETCHUP: See, it's not just the setting for a Hills Lauren-Heidi face-off. Playboy Hugh Hefner having dinner with seven of his "roommates" on the Sunset Strip. Excellent commentary follows: "Dude is old and busted. At least eleventy. I know that's not new info, but damn." [Defamer]

AUSTIN Special Report: Not-quite-Top Chef Chris "CJ" Jacobson at the Austin City Limits music festival, where our informant says he was recognized by several folks. How did he look? "In good spirits despite the unfortunate loss." [StarWatch Inbox]