While we're on a Hollywood jag, might as well check in with a few other projects going on in the neighborhood. Got a snap, a tip, a query? You know what to do. 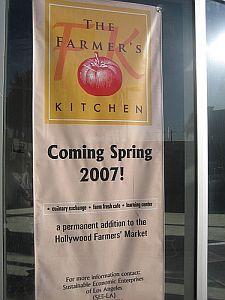 THE FARMER'S KITCHEN: This community project was announced last year, but as you can see from this photo taken by an Eater operative today, it's still just signage. Located in an apartment building at Selma and Morningside Court, the Farmer's Kitchen will be a place for farmers to sell their their goods, use the kitchen to prepare food to sell at the market, plus it will be a sit-down and take-out cafe for the general public. Unlike the adjacent farmers' market, it will be open almost daily. Pompea Smith from See-LA, the organization that oversees the Sunday farmers' market, explained that electrical problems caused delays, but now they're in the process of filing all the appropriate permits to start construction. Tentative Opening: April 2008. [PLYWOOD]

THE DELUXE: This resto-lounge partnership between Kristofer Keith, from design firm Spacecraft Studios, and Adolfo Suaya will probably debut next year. Keith tell us "four to six months," that they just started construction. He says DeLuxe will have a modern Art Deco, chill, non-velvet rope vibe. [PLYWOOD]

GOA: This ongoing Sutton/Suaya project on Cahuenga is described as an Indian, Moroccan, Japanese mashup that's more club than restaurant (but will serve food). Word on the street is it's still a couple months out, so we'll be surprised to see this by the holidays. Maybe New Year's Eve? [PLYWOOD]