Remember: If you spot a celeb at a dining establishment, it's your duty to report it. Even if they just run in to use the bathroom. 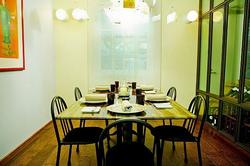 BASTIDE: Speaking of our misty-eyed Reagan memories, one reader gushed about her meal at Bastide, where Nancy Reagan was seated at the chef's table nearby. It was the first night of the new chairs, sans cushions, and they ran out to get her table some tush-pillows. [StarWatch Inbox]

SHINTARO: Over the weekend, we ate our Hollywood strip-mall sushi close to StarWatch regular Vince Vaughn (although not nearly close enough). He ordered lots of rolls and gave the waitress a high-five. The only bad news: He was with a cute blonde. [StarWatch]

SPRINKLES: Those waiting for their Beverly Hills frosting fix were treated to a Prius-driving Jason Schwartzman, who parked out front. But after contemplating the line, he split. Maybe he went down the street to Crumbs? [Defamer]

THE LITTLE DOOR: Sitting side-by-side at the deal-sealing restaurant were Scarlett Johansson and Ryan Reynolds. [People]

GRACE: A surprisingly non-robotic Victoria Beckham and three business-like people asked for a new table before they were joined by David Beckham. [Defamer]

AMMO: Last Friday, Kevin Bacon was at the Highland Avenue resto, looking "not a day older than his Footloose days." [Defamer]

TOSCANA: Enjoying Brentwood Italian this week was Billy Crystal, with what looked like his wife and a friend. [Defamer]

DAN TANA'S: Yes, that was Ron Jeremy in that booth with the scary people and Harry Dean Stanton looking creepy at the bar. [Defamer]

Vaccine Verification Compliance at LA Bars and Nightclubs Is High, According to Report