Although it was almost too hot to even consider eating any meal not approved by the raw food movement, plenty of celebs stuffed their sweaty selves silly over the long weekend. We'll take your air-conditioned tips right here. 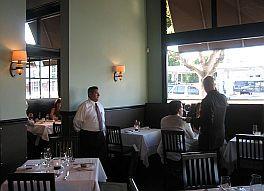 OSTERIA MOZZA: Big night last night for the big O, reports a tipster. Jeffrey Katzenberg at a table with three others, drinking ice tea with his artificial sweetener of choice: Sweet N Low. At a different table was Jennifer Aniston with a male and female, not BFFs the Arquettes. Afterwards Katzenberg was spotted climbing into his Prius (the man prefers the pink packet but drives a green car?) while Janet Jackson and Jermaine Dupri were coming in. [StarWatch Inbox]

BOA: Last Friday Ray Liotta was spotted at the Sunset Strip steakhouse with what looked like his daughter. [StarWatch Inbox]

PINKBERRY: 4 out of 5 professional boxers with face tattoos agree: fake froyo hits the spot on a hot day. Mike Tyson was at the Studio City location on Thursday afternoon, and it's not the first time he's been spotted there. [Defamer]

CAFE STELLA: A Superbad Michael Cera on a date with Mandy Moore last week at the Silver Lake eatery. Crikey, didn't we just see her with Jason Segel? [Defamer]

CHATEAU MARMONT: Eva Longoria, Christina Applegate and three other women cracked themselves up while they ate on the patio, then said hello to Brooke Shields and another group of gals. Also there: Eric Dane, Rebecca Gayheart and Rumer Willis. Reason #41 why celebs like the Chateau: They don't have to calculate a tip. [People]

CLEMENTINE: A hovering Jon Voight snagged a group's table as they got up to leave the crowded Century City seat-yourself cafe. [Defamer]