WEST HOLLYWOOD: Spotted on La Cienega near SMB: Amoon Ra. On the side of the building is a fancy silverish sign. Nightclub? Restaurant? We have no idea what it is or who owns it, although we did see that they were hiring staff about a month ago. Anyone? [~ELA~] 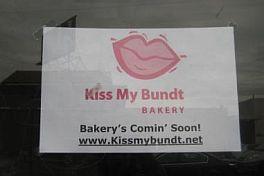 MID-CITY/THIRD: Sweet shop Kiss My Bundt is expected to debut at 8104 W. 3rd Street by March. It will have, yep, you guessed it: Mini bundts, baby bundts, a big 'ol bundt...lots of bundts. [Blackburn and Sweetzer]

KOREATOWN: A family-run Japanese restaurant called Ruby Table will open in the Mercury building at Wiltern and Western in February. The owner says it will be a "fun, casual place to go with your friends and family.” And his or her aunt is the chef. New option for shows at the Wiltern, perhpas. [Angelenic]