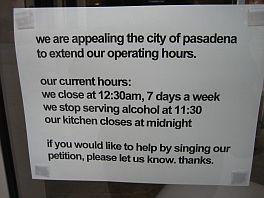 In December, we passed this sign hanging on the door of Bodega Wine Bar in Pasadena. There are a few things going on here. First, Bodega is in the Paseo Colorado, a mixed-use "urban village." On that side of the property, there's been quite a lot of restaurant turnover (Border Grill is now Paseo Cantina; Delmonico's is now a jazz club), but Bodega---especially for this less trafficked side---has been there since the mall opened. That side also has most of the apartments.

We've been to the wine bar a few times, but only once it was past 10pm. On a weekend night, it was surprisingly packed with a young crowd looking to get their drink on, but who only found wine and beer instead of the hard stuff (guys in trucker hats--this was a few years ago--drinking shots of something and red bull, with a zin chaser. no lie.). Point is: It probably gets loud, it's mostly outdoors, and sounds from the bar must echo up to those $1820-3050-a-month dwellings. So here we have Bodega's owners petitioning to stay open later than 12:30am. We wonder if there are enough fans who want Bodega to stay open late, or Paseo residents who don't, to make an impact on the city's decision. (We also wonder if "singing" the petition will help either side.) Sidenote: Will other mixed-use "villages," a la Rick Caruso's Americana at Brand, have to deal with the same issue? And is it better or worse than any other neighborhood filled with restaurants and bars? Discuss.
· Super Plywood: Americana at Brand vs. L.A. Live [~ELA~]