LARCHMONT: The story about chains taking over the charm of Larchmont Village isn't new, but one depressed local writes: "So sad...corporate America is in full attack and my beloved Sam's Bagels on Larchmont is paying the price. They lost their lease and will be gone effective Feb 15th. A PANDA EXPRESS is going in! Are you kidding me?" That Panda Express rumor remains unconfirmed, but it's spreading like wildfire. We can offer a little solace: According the corporate website, out of the 24 planned California outlets, not one is on Larchmont?but it only goes to July 2008. [EaterWire Inbox] 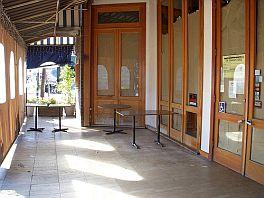 VENICE: After 10 years, Marguerite Cafe on Washington Blvd. shut its doors last month, and the owners hope to open a new location in the next few months. Replacing it: Canali Cafe, a new venture from Osteria Latini's chef/owner Paolo Pasio. [Yo! Venice]

SANTA MONICA: A tipster sends word that Il Dolce on Montana Avenue "looks kaput," with doors and windows papered over. It will not be missed by some Yelpers, including the one that sounds like a bitter ex-employee: "The service is beyond terrible, but it's mostly because they are under staffed and under appreciated...there isn't any help anywhere and the new, annoyingly stuck-up owner just walks around in a daze and smiles at every one. She should be assisting her angry customers, not socializing with rich men." Good times. [EaterWire Inbox]