ECHO PARK: If it's not froyo, it's wine bars. Nicole Daddio (totally her real name), a former producer for the CSI franchise plans to open City Sip LA in March. Direct from Daddio: "Last year I received my wine certification from the International Sommelier Guild and have been teaching wine classes. City Sip LA's emphasis will be on demystifying wine and guiding our customers through the wine selection process. There will also be small bites to pair with your wine like artisan cheeses and chacuterie, as well as gift items in our wine boutique." Location: 2150 W. Sunset Blvd. [EaterWire]

DOWNTOWN: Do we need so much freakin' frozen yogurt? Cantaloop has two locations planned for the Financial District. Two. TWO. [Angelenic] 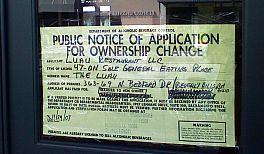 BEVERLY HILLS: A reader sent this snap proving that Colors on Bedford is finally and 100% defunct. Moving in: The Luau Restaurant. Interesting name choice considering one of LA's early classics was The Luau on Rodeo Drive (1954-1978 according to LA Time Machines), owned by Steve Crane, one of Lana Turner's husbands. Obviously not the same owners, but similar concept? We can't wait to hear. [EaterWire Inbox]