Wrapping up some odds and ends from the week. Got a tip for us? Drop it in the EaterWire inbox anytime. 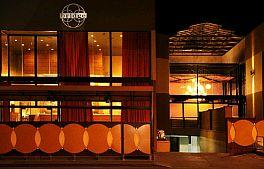 WEST HOLLYWOOD: Looks like STK, the trendy steakhouse from the One Group, should finally debut around mid-February. The group opened One Sunset last year and picked up the Bridge space on La Cienega in June. Owner Erica Cohen originally hoped to open by November, but knew that was probably a long shot. [EaterWire]

WEST HOLLYWOOD: From the David Myers/FoodArt camp, chef Ramon Perez is now overseeing all pastry components of the entire company, from the dessert tasting menu at Sona to the macarons at Boule. Might we suggest making new desserts at Comme Ca a top priority. And over at Sona, Kuniko Yagi has been promoted from sous to chef de cuisine. [EaterWire Inbox]

CALABASAS: Too far for us to really know much about it, but we got a release saying that Renee and Ron Lebow changed the name of their Native Cafe & Gathering Grounds (which was Gaetano's before that) to Calital, with Gaetano's chef Joel Jimenez doing the honors. [EaterWire Inbox]