The people behind Cinespace (Errol and Kim Roussel, etc.) hope to open the 24/7 Kitchen 24 by the end of March if all goes well. The design---by busy Kris Keith/Spacecraft Studios, who also did Goa---is a throw-back to a classic diner but updated, lots of white, walnut tables, some fuscia thrown in for color. There will be a full-bar, DJs, American diner food with a twist. What's with the onslaught of new 24-hour spots in Hollywood, anyway? (1608 N. Cahuenga) 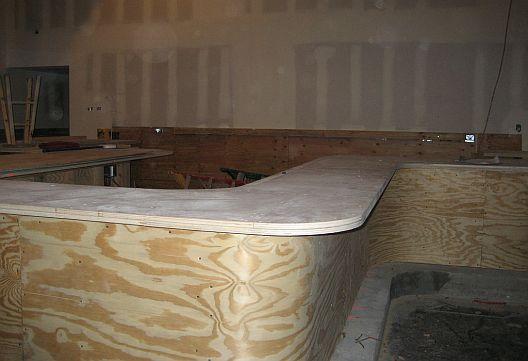 When we say Plywood, we really mean wood: Kitchen 24 in progress

Another Kris Keith/Spacecraft project is actually one of his own. Partnering with the ubiquitous Adolfo Suaya, Bar DeLuxe (the name may change; Plywood below) will be an Art Deco-inspired bar and lounge; the room is tiny, but there's a fireplace. Bonus! Open sometime this year (at least three or four months out). Previously noted here and here.

A look inside DeLuxe