Because it's so close, because we love it as much as Britney (poor, poor Britney), because everyone should go just once if not once a month, some Vegas restaurant news. Expect regular VegasWeek every week or so. If you have a tip or experience to share, please throw the dice here. 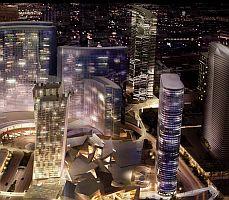 CITYCENTER: This won't happen until CityCenter opens in 2009, but Mr. Chow has finally been lured to the Strip. As part of the $7.4 billion MGM Mirage mini-city going up between the Bellagio and Monte Carlo, the Harmon Hotel gets the celeb-magnet restaurant, to be designed by Michael Chow himself. According to the flacks, hoteliers have been trying to ge a Mr. Chow to Vegas for years, and Peter Morton almost cut a deal for the Hard Rock before he sold it. The Light Group, which owns Fix, Stack and Diablo's among other Vegas spots, finagled a partnership with Chow and MGM Mirage. TMZ will need an extra horde of cameramen to set up camp outside. [EaterWire]

HARD ROCK: Retro cool is quickly getting pushed aside for the Paris Hilton-Lindsay Lohan-The Hills-type vibe. Case in point: A.J.'s Steakhouse at the Hard Rock has closed and sometime down the road the Dolce Group will open Rare 120. An opening date hasn't been announced. [JBF Dateline/EaterWire]

THE STRIP: New Year's weekend saw a bunch of nightlife debuts. Rumors swirled that it might not open in time, but Jay-Z's sports-themed 40/40 Club premiered at the Palazzo; missing a few bells and whistles, Miami-import Prive debuted at Planet Hollywood; the Light Group opened The Bank (formerly Light) at the Bellagio; and of course, chef Kerry Simon's CatHouse swanked up the Luxor. [LAT]