Share All sharing options for: Buzz-Word for 2008 is "Korean": Seoul Bros., In Seoul and Jian BBQ

Last year it was all about the Korean frozen yogurt onslaught, but 2008 is looking to be all about Korean food in general. Restaurant consultants Baum & Whiteman say the country is still "getting used to" Korean food, but its time is due. Of course, in LA we have amazing authentic Korean restaurants, but not many outside of Koreatown. This year, they're popping up in unexpected places.

PASADENA: Brothers Andrew and Alexander Hong will open Seoul Bros. Korean Grill tomorrow, Wednesday, January 8, in the Lake Avenue shopping district. We kind of like that it's not in Old Town. The Hongs say they "wanted to open a place for good Korean barbecue with fresh ingredients, in a fast, casual atmosphere," and that the décor is "unmistakably Korean but with a modern twist." If it works, we imagine Seoul Bros. will be on the fast track to franchising. It's about time we start seeing Korean barbecue in malls across America. There was a private party this weekend, but the windows are repapered today so we couldn't see in. (851 Cordova St., Pasadena, 626.795.1777)

MID-CITY/BEV CTR: Blackburn and Sweetzer and one of our tipsters recently noticed the newish In Seoul Café. While it's not an entirely Korean menu—an owner says they have "salads, drinks and sushi"—but there are a few Korean specialties like bibimbap. (8230 Beverly Blvd., 323.944.0677) 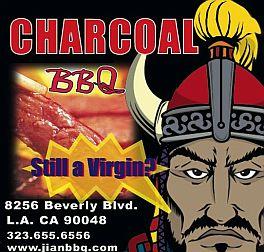 MID-CITY/BEV CTR: Not far from In Seoul is the long-awaited Jian Korean BBQ taking over the former Em Bistro space. Last word was that it would open in December, but still nothing. The phone number isn't listed, the website is still under construction, but it's been advertising in the LA Weekly. (What's with the angry warrior and all this talk about virgins?) When we inspected the space during demolition last year, one of the designers explained the state-of-the-art grills they were putting in, the bar, the whole concept. Permits had to be a bitch to get for the exhaust system and grills, and the owners tried to get a license to serve alcohol until 2am (they didn't), but all of that has been resolved by now. No idea what the hold up is. (8256 Beverly Blvd.)