Here we have another rendition of The Dish, a slew of new openings around town. This week seems to be the Mexican addition, but if you have any newcomers to your 'hood—with or without margaritas---drop it here. Rocks, no salt, please. 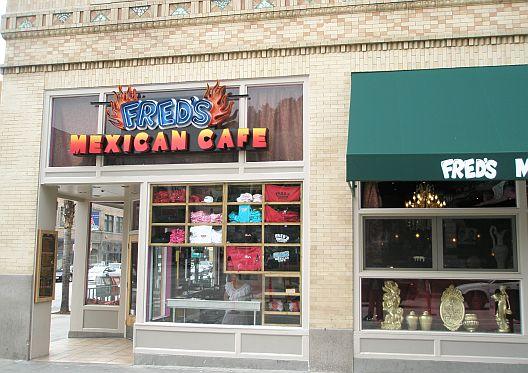 PASADENA: Replacing Moose McGillicuddy's on the corner of Colorado and Arroyo Parkway is Fred's Mexican Café, a Cheesecake Factory of Mexican food (huge portions) with wacky décor a la Hard Rock thrown in for good measure. The one kind of chain Old Town didn't have was Mexican, so this could work. It even has a woman making tortillas by hand in the window. King Taco has nothing to worry about: Two completely different beasts. (119 E. Colorado Blvd., 626.304.9955)

PASADENA: Confirmed: Seoul Bros. Korean Grill opened for lunch today. They're open every day from 11am-9pm, and it sounds bus-ay already. The menu is quite limited, but maybe it will grow down the line. Note: No kimchi. Really? (851 Cordova St., 626.795.1777)

WEST HOLLYWOOD: The Anaya brothers, owners of Cha Cha Cha in Silver Lake, opened Pinche Tacos on Monday. The menu is filled with "family recipes," you can get beer from the liquor store across the street, and it stays open until 4am Thu-Sat. Ole. (8200 Sunset Blvd., 323.650.0614)

VENICE: It's Mexican madness right now. The Cabo Cantina that took over the Bite made its two-for-one debut. From a reader: "Probably opened a couple weeks ago. Same vibe as the others, but with a much beachier feel and a giant upstairs fire pit to boot. Two story space with nice finishes." (30 Washington Blvd., 310.306.2500)

BRENTWOOD: And yet even more Mexican food: Frida's Taqueria, on outpost of Frida's Mexican Cuisine on Beverly Drive, finally opened at the Country Mart. (921 Montana Ave.)