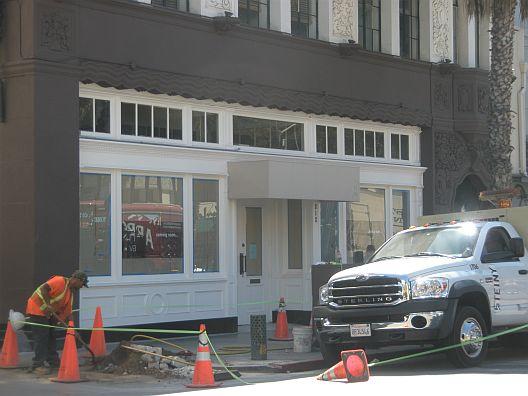 When people talk about cursed locations, one must consider what the Mozzas did for the former Alessi space on the corner of Melrose and Highland. That success is pretty much expected for Riva, the new Italian restaurant from the people behind Fraiche in Culver City (chefs Jason and Miho Travi, partner Thierry Perez, etc.). They took over the deservedly defunct Scarboni on Wilshire Boulevard in the beginning of the year, did major reconstruction, added pizza ovens, rejuvenated the exterior and hung new, albeit subtle, over-the-door signage. Travi first alluded to a "end of the year" opening, and then November was whispered in the wind. Hiring and training is underway, and now we hear it's anywhere from two to three weeks out. Our money is on early November.
· Plywood Query: Is Travi Taking the Scarboni Space? [~ELA~]
· EaterWire: Updates From Travi, 5x5 Bastide, More [~ELA~]
· Plywood Tracking: Riva, "Another Fraiche Idea" [~ELA~]