You see them but they don't care if they see you: Got a sighting for the StarWatch? Drop it in the tip jar. "Starwatch" in the subject line is helpful. 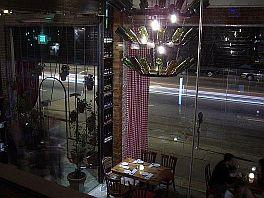 OSTERIA LA BUCA: Spotted last night (10/16): "Govind Armstrong and a lady friend. I see him everywhere. Waaaaaaay more interesting: Carla Gugino and Peter Krause came in and sat at the table right next to me. They had white wine and started with some antipasto for which Carla, the Italian, asked for olive oil. I wonder if they’re friends or just discussing a project? Whatever reason they were there for they certainly upped the gorgeous people factor. I was giddy, being a big fan of both." [Starwatch Inbox; photo]

CAFE WAS: On Monday (10/13) BFFs (who knew) Eddie Murphy and Bobby Brown hit Hollywood to sip on vodka cocktails and watch the pianist revolve in the middle of the room. [Starwatch Inbox]

OSTERIA MOZZA: Chalk up another regular for the Osteria: A second Dave Grohl, sans the other Foos, sighting (10/6) for the Starwatch.[Starwatch Inbox]

LA BREA BAKERY: The Kingston Trio...wait, we kid. Gwen Stefani, Gavin Rossdale and their kid Kingston stopped in the bakery before heading over to a West Hollywood pumpkin patch. [People]

STK: Before we were accosted for cigarettes by The Hills Heidi Montag at XIV, she was reconciling differences with arch-frenemy Lauren Conrad (for the cameras, natch) just down La Cienega. [People]

NINE THIRTY: We want a bodyguard to pay our bill: Will and Jada Pinkett Smith enjoyed some cocktails, fries and someone picking up the tab at the W hotel restaurant. [People]