Share All sharing options for: StarWatch: Johnny Knoxville at Izakaya by Katsu-ya, Bono at Katsuya, Drew Barrymore at Edendale, MORE

You see eating them but they don't care if they see you: Got a restaurant sighting for the StarWatch? Drop it in the tip jar. "Starwatch" in the subject line is helpful. 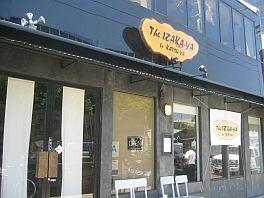 IZAKA-YA by KATSU-YA: " I saw Johnny Knoxville leaving the popular 3rd street sushi spot as I was arriving (10/23). He was with a pretty slender brunette and drove a Tahoe like SUV. Who knew that the crude Knoxville, had taste crudo, Japanese style!" [Starwatch Inbox; photo]

NOBU LA: All in one night (10/22): Ryan Phillipe and Abbie Cornish were eating together while the Beckham's dined with five friends. Clint Eastwood was in with his son and four others. [Starwatch Inbox]

KATSUYA: A reader was hainging out at the Brentwood location on Saturday (10/18) and the celebs kept rolling in: "First there was Helen Hunt, then Tom Hanks and Rita Wilson with another couple; I've seen them lots at BW so I'm assuming they're all regulars here. The highlight of the night, though, had to be BONO!!!! He came in with his family and was nice enough to give a few drunk fans a hug upon leaving. It didn't stop there, though because James Brolin and Babs herself walked in at 10 o'clock! Wow!" [Starwatch Inbox]

PIZZERIA MOZZA: A tipster tells us Bono made his way over to the pizzeria earlier this week, too. [Starwatch]

OSTERIA MOZZA: "Tonight, October 18, Jack Coleman (Horn-Rimmed Glasses on Heroes) was with a large group at at table right by the front door . . . he actually wears glasses (but not horn-rims). [Starwatch Inbox]

EDENDALE GRILL: A tipster saw Drew Barrymore eating dinner and drinking beer on Friday night (10/17), plus Devendra Barnhardt and "a couple of Geico cavemen" were in the crowd. And then the rant: "When the halibut did Edendale become a beacon in the night for every hipster this side of La Brea? Neo-mullets, faux-hawks, Pat Benatar look alikes and their douchebag boyfriends all shooting at the walls of heartache, bang bang. It was worse in there at 10:30 pm than standing in line at the Echo waiting for the Fleet Foxes to play. What happened to the best adult bar on the east side?" [Starwatch Inbox]

WHOLE FOODS: John C Reilly was spotted "feeling up the organic produce for an inordainte amount of time" at the Pasadena store. "BTW, totally hot and NOT short." [Starwatch Inbox]