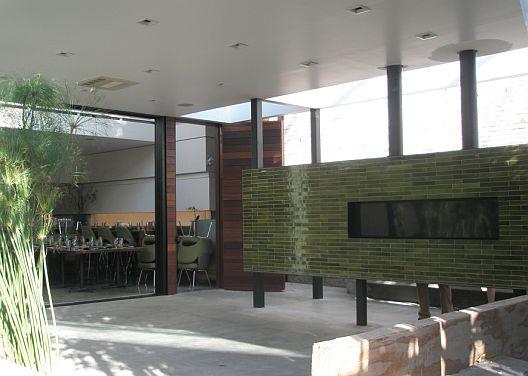 There's still graffiti-splashed plywood fronting Conny Andersson's new AK Restaurant on Abbot Kinney, but inside looks to be quite complete. This here is a snap of the indoor-outdoor space, with the green-tile fireplace anchoring the patio, as of this weekend. Andersson, who was exec chef at the Beverly Wilshire hotel up until April, plans a seasonal menu with locally grown, sustainable and organic ingredients whenever possible, with a special nod to his Swedish heritage; dinner nightly, with additional "tidbits" at the bar on weekend nights and brunch weekend days (here's a look at the dinner and brunch menus). Yo! Venice caught a sneak peek last weekend during the Abbot Kinney Festival, but the restaurant will not open until next week, shooting for October 16.
· Plywood Report: AK Restaurant, More [~ELA~]
· AK: New Grub on Abbot Kinney [Yo! Venice]