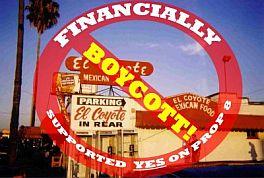 A reader just queried: "Why are all of my gay friends boycotting El Coyote? I'm trying to find something on the news...did they donate to yes on 8? Halp!" One quick search and, yes, apparently there is a call to boycott El Coyote because someone affiliated with the restaurant donated $100 in support of Prop 8, according to the official donors list (support and opposition). However, one commenter on the Shut Up! I Know! blog says that the donor, Marjorie Christoffersen, is only peripherally associated with the restaurant (she is a niece of the original owners and donated her own money, not the restaurant's), and that "El Coyote has always been a friend of the gays." Still, they want answers (we're working on it). "NO on Prop 8" protests snarled traffic in several business districts over the last week, so this may be the new tactic that could really cripple business, especially in these down times. We haven't combed through the donor list (tres long) to see where other restaurateurs stand on the issue. More to come, we're sure.
· Boycott El Coyote Cafe [Shut Up! I Know!]