Celebrating the Seasons, Farmers at Craft

Share All sharing options for: Celebrating the Seasons, Farmers at Craft 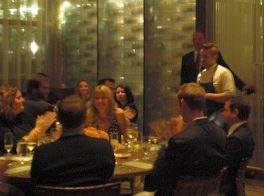 We were invited to Craft's first "farm-maker dinner" led by chef de cuisine Matt Accarrino last night, which turned out to be a delicious romp through seven courses of seasonal, organic produce-inspired cuisine and great wines. Like wine dinners that have a winemaker in attendance to explain what and why they do what they do, the "farm-maker dinners" feature a different farmer---last night it was Thetis Sammons from Epic Organics, who talked about dealing with crop dusters while growing up in the San Joaquin Valley, just one reason why she's now an organic farmer. There's something about meeting the people behind the food you eat, which is why, if these dinners catch on, everyone should go to at least one.

This isn't the place for an in-depth critique of the food, but we can say that every course was very enjoyable and the wine pairings superb. Well-worth the money (we can say that even if ours was gratis), and go hungry. Some of our favorite take-aways from the night were the wrapped muffins we got for the morning after (already demolished), a small jar of pickled vegetables, and these words from Accarino when he introduced the woman who brings produce from farms around Los Angeles: "What's laid out is like a grocery store on steroids that I can make a menu from an hour later. It's amazing to me...especially after coming from New York." A bit more about Sammons here, and the dinners here. Accarrino's hoping to make these dinners a regular occurence, but there's no date set for the next one yet.
· EaterWire: Craft's Farmer's Dinners, More [~ELA~]
· Farm to table: Bush basil, blue hubbard squash and Thetis Sammons [Daily Dish]