You see them eating but they don't care if they see you: Got a celeb restaurant sighting for the StarWatch? Drop it in the tip jar or tweet it. 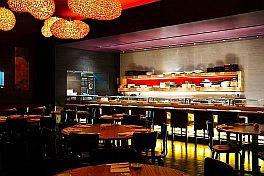 NOBU LA: Her Madgesty herself was at the La Cienega location last night (11/13). " Madonna was with a music producer friend, and nearby the Beckhams with two friends." On Wednesday, it was Nicolette Sheridan with some girlfriends. [Starwatch Inbox]

THE MOZZAS: Top Chef winner Ilan Hall was at the Osteria but popped over to say hello someone working at the Pizzeria. "He was rocking a full Fiddler on the Roof -nspired beard. In preparation for his new Kosher (?) restaurant?" (Not sure if Gorbals is kosher, but...) Also in that night: Rick Shroeder and his wife, Andrea, a Top Design finalist. [Starwatch Inbox]

TAYLOR'S STEAKHOUSE: A reader was pretty sure she say Christina Hendricks (Joan Halloway on Mad Men) on Saturday (11/8). "She was dressed down in jeans and no makeup and almost unrecognizable. In fact, I argued it wasn't her but I was overruled by the majority, who heard her voice and said it most definitely was her." [Starwatch Inbox]

KATSUYA: Because she can't eat at her Hollywood restaurant Beso every night, Eva Longoria Parker and some gal pals had sushi a few blocks away. [People]

GIORGIO BALDI: Not unusual to see them here, but an unlikely grouping: Tom Hanks, Rita Wilson, Tom Ford and an unidentified older gent. "TF looked like his airbrushed self, TH was looking slimmer and Rita was looking good as wel." Seen last Saturday (11/8) [Defamer]

LOCANDA DEL LAGO: These two are really hitting the town lately: Another Tom Hanks and Rita Wilson sighting, last Friday (11/7). Also in the house, Stuart Copeland who's "there pretty much every Friday night." [Starwatch Inbox]