Getting Ramsayed: Sante La Brea on Kitchen Nightmares This Week

Share All sharing options for: Getting Ramsayed: Sante La Brea on Kitchen Nightmares This Week

We knew when this season of Kitchen Nightmares premiered that there would be two Los Angeles-are restaurants to be Gordon Ramsayed: One is Sante La Brea, which has gone through many changes over the last 10 years, and some place in Lancaster. Everyone pretty much knew when they were taping the Sante episode since there were Craigslist ads asking people to go and "try the new Gordon Ramsay menu," and there was one pan, but for the most part, it was business as usual (Yelpers who went to the old and new restaurant liked the changes). Well, the day is here: The Sante La Brea ep airs this week (Thursday, Nov. 20, 9pm, FOX, and we chatted with owner Dean Hamoui who told us why he did the show and what it was like being handcuffed by Ramsay---literally. 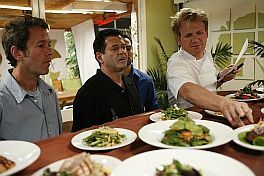 Why do a show like Kitchen Nightmares?
This restaurant was doing very well until about two years ago when I renovated the space. [ed note: Hamoui has been an owner of the restaurant since it opened as A Votre Sante in 1998] We had it so there were two separate restaurants, two different permits and there was a Mediterranean restaurant sharing the space. Later when that restaurant did not do well, they closed down. So I had to cancel that first renovation and do it again. So during the last three years we renovation twice, and that kind of put a toll on the business. I lost a lot of business, and I ran out of capital in the middle of the renovation. I had to work alone to cut down expenses. One of the bakers working with me, he noticed I was running like a chicken with its head cut off, and he wrote a five page letter to Kitchen Nightmares. Then they interviewed us and let us know after that.

Were you worried about how it would make you look on TV?
I didn't want to air my dirty laundry. I didn't want to show my staff not showing up. There were problems with cooks taking advantage of me, running out of budget, I really didn't want anyone to sympathize with me about that. But I love this concept, this restaurant. My credit is ruined now. I try to support this place. The food is top shelf, I have nothing to hide there. It's just half the time I'm waiting on tables and sometimes have to cook at the same time. I was about to close down, so I was looking for anything to sustain the business. That idea of having some kind of publicity like this should help, and I went for it.

Did you know anything about Gordon Ramsay?
No.

How did you like working with him?
I liked it. I think I'm the only one who didn't talk bad. I just took everything he told me as constructive criticism. I never watched before. The first episode I saw was when we were working together. I never thought I had any problems before. My standards have always been high, use the best ingredients.

Have you seen the episode?
I just saw the promo the other day and it looks like I've been misrepresented a little bit.

Are you worried?
I am, but again, my place sells itself. I know he found some bad eggplant in the fridge. We had to close down before the show, I had not been running the business for quite a bit. No way I would've served that, or the lemons. Everyone knows that's not the normal way of keeping restaurant. The whole concept with the show, you have to be as bad as possible. They had to make me look as bad as possible. I had this one dish with bean paste sauce, tofu, and lots of vegetables. He called it "poo poo" on the show.

Have you seen any change in business since people started finding out you were on KN?
No changes yet. We're expecting business after the show airs.

What was the best thing working with Ramsay?
The fact that he fixed things up. There are plenty of problems that I wanted to fix, and when Gordon came he actually put the lid on all those problems---my sons straightened out, Mark [the manager] quit coming with crazy ideas. I needed someone to help me put it back on the map.

And the worst?
Maybe that we got misrepresented with some issues. There's no shortage of drama here at all. One time he had me handcuffed, like arrested, so I would delegate. I forgot about the cameras, I forgot about everything and yelled.

You know a lot of restaurants that appear on the show end up closing shortly after.
Hopefully it doesn't happen to me, with the fact that who I am, behind the scenes, the food has never been an issue here. I do have regulars. And even on the worst days, I still had people coming in and say please don't close. I'm still in business because people have faith in this business, from the landlord who cut back on my rent to the busboy. This is a faithful vision of mine, and that fact that I paid dearly and know that we'll get back on track.