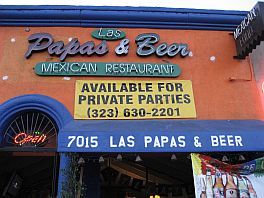 Yesterday evening we got a report from a passerby about a fire on Melrose near La Brea in what looked to be Anarkali Indian Restaurant. Almost immediately after, we got another report: "I live right by the strip of Melrose where the fire was tonight, and we just walked up to take a look. The fire is definitely put out, though fire trucks were still there and the street is still blocked off as of 9:15pm. However, it looks like the fire mostly (if not totally) came from Las Papas & Beer, the Mexican place right next to Anarkali. The awning of Las Papas is totally burned off, and the formerly orange exterior wall is almost completely charred black now. So sad -- the food there is delicious."

Well, was. According to the LAFD Alert, the fire was knocked down in 23 minutes, contained to one space (7015 Melrose Ave.) and no injuries. The phone for Las Papas & Beer is currently disconnected, and a Yelper found out that the restaurant shuttered a few weeks ago. But that sushi place supposedly moving in is going to have some kind of clean up. [Photo credit]
· Fire! [~ELA~]
· Las Papas & Beer [Yelp]