We always welcome tips, pics and goss for the EaterWire. Send 'em here. 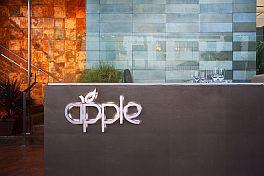 WEST HOLLYWOOD: This isn't too much of a surprise, but the Pussycat Dolls Lounge that was supposed to join Apple Restaurant & Lounge on Roberston has been scrapped. Instead, Robin Antin and the girls will take their show to the Viper Room for a year-long run beginning November 28. What about Apple? The lounge---below the restaurant with entry through the dining patio---is so popular, they're now using that extra space for spill over. We're told this is so the patio diners won't be interrupted but the clubhoppers, so those of you who wouldn't be caught dead eating frog's legs in the close proximity of naked legs, there's no excuse. And about those frog's legs...looks like Bryan Ogden's menu has been toned down in price and scope, much more fitting for the venue. [Daily Dish; EaterWire]

MID-CITY: Suzanne Tracht and Preech Narkthong are hosting a fundraiser for Sova, the food and social wing of the Jewish Family Service of Los Angeles, at Jar featuring a menu from Tracht's forthcoming restaurant Suzpree. There will be a champagne reception, hors d'oeuvres and a five-course sit-down dinner with things like as braised oxtail with shanghai noodles, kabosha dumpling with matsutake broth and miso cured salmon, plus a silent auction. This is for the heavy hitters: $500 per person. Suzpree is scheduled to open in 2009. (Nov. 16, 5:30pm) [EaterWire]

WEHO: On the other end of the spectrum, the Spanish Kitchen on La Cienega celebrates its 6th Anniversary on November 20-22 with a special $6 menu, things like a shot of Patron, regular margarita, three tacos, enchiladas, burrito or nachos. [Eater Inbox]