Got something for the EaterWire? The tip jar awaits. 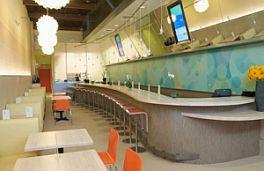 MARINA DEL REY: Just in time for holiday travel, Kazunori Nozawa's scaled down SugarFISH has curbside service for those traveling through LAX. Order at least 15 minutes in advance and pull up right in front (Admiralty Way), and a staffer will bring the sushi---in its full recyclable packaging---to your car door. What more can you ask for than an endorsement from another chef? Sona's David Myers says he doesn't "leave home without it" when he travels. Yes, that was actually in the press release. [Eater Inbox]

HOLLYWOOD: While others are taking away hours, the tucked away Melograno just added lunch service this week. Tue-Fri, 11:30am-2pm. [Eater Inbox]