It wasn't intentional, but we haven't had a Starwatch in awhile. Let's remedy that, shall we? See a celeb at your favorite spot? The tip line awaits all emails with "Starwatch" in the subject line. 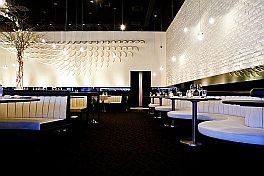 STK: From a reader: "I had a free gift card and went there last night (ugh...). But anyway, Martin Lawrence was there with three other people sitting in a corner booth. [Starwatch Inbox]

Laurel Tavern: A friend spotted Will Farrell at the Studio City gastropub recently (12/9). "In my entire life, I’ve never gone up to a celebrity, but I had my dvd of Step Brothers in my car, and he is my favorite actor of all time, so I couldn’t resist? he was really nice and I made a joke and he chuckled?he said it was his first time at the restaurant and that it was pretty cool." [Starwatch Inbox]

Talesai: The Mummy Brendan Fraser apparently is a fan---he's been in twice this week. [Starwatch Inbox]

Le Pain Quotidien: The happy little couple Jake Gyllenhall and Reese Witherspoon (and her son) had breakfast at the Brentwood location. [People]